The landscape of the west side del Rio Santa Cruz is changing. The three blocks west of the river, between the streets of Congress and Cushing, bloom with growth. The base of the develop stems from the Mercado San Augustin, a block of shops enclosing an open patio. The patio is a popular destination for cyclists. After finishing “The Loop”, or coming down A Mountain, or completing a Tucson Mountain ride, riders gather to share adventures. 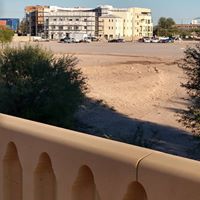 A new building of apartments built atop a bottom floor of retail shops pierces the scenery. Only in my mind is this a multi-functional development. The building seems to be nearing completion. The sound of finishing drywall hums from within as asphalt takes form of a parking lot. 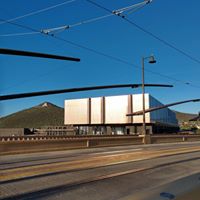 South of Cushing Street is the new home of Caterpillar. Caterpillar is a corporation which designs, manufactures, markets and sells machinery and engines. The east side of the main building is a tribute to the copper industry. The morning sun reflects against the copper siding.

North of Cushing Street, Gadsden Company has developed the Mercado South Annex (MSA). The design complements the same idea of the Mercado San Augustin by enclosing a patio with shops. The difference is this creative layout consists of a series of railroad boxcars. The oxidized boxcar exterior complements the copper facade of its southern neighbor.

MSA is a collection of unique shops and an outdoor stage managed by the performing art group Flam Chen. This morning the stage area seemed unusually disheveled and messy.

Having a little extra time, I decided to visit the little coffee shop for a cup to carry with me on the last leg of my walk. The shop hadn’t opened yet. There were a few us waiting. I asked to share a table with a gentleman already seated. He was intimately involved with the performing art group. He was also involved with managing visiting acts. Seems as if last night’s show was a bit rowdy and very destructive in their disrespect of another’s property.

Creative chaos is a thing. There is fair warning to ensure that the message is louder than collateral damage. The awareness of precaution keeps the door open for encores. The man spoke as he worked through his anger telling his story of last night’s event. Not only was the act destructive and disrespectful, there was irreparable damage. 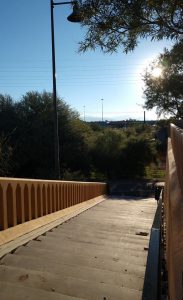 Two things came to mind through this early morning conversation. My first lesson was in the arena of forming judgments rather than being curious. I formed and held the idea that the annex was falling apart because of what I saw. The subtle energy that something was amiss could have stayed just as that. My mind jumped to label the disruptive energy as trashiness. This is important. The tendency to jump to label a feeling stifles a greater understanding of an energy. Labeling is quick and over.

Once feelings become contained and labeled, review of an energy’s nature ceases. Things aren’t always as they seem. Rare is the time to disrupt the ripple of feelings with a dose of inner progress. Flawed is the possibility of expansion. The second thing isn’t nearly as important.