What a week! What a month! What a year! Today is Elie Wiesel’s birthday. Most days I search the website “thinkexistdotcom” to see who was born and their quotes A quick comparison of people and their thoughts hint similarity of ideas.  I don’t spend the time to check out their validity, I simply enjoy the parallel and contrary thoughts. Doing this little exercise early in the day colors my morning stroll. Quite a few voices accompany my steps, quite a few perceptions shift and change.

One morning this week has stayed with me. I weigh the merit of conclusions against the level of judgment and blame-shifting. The difference is knowing what is true for me against what is wrong with the thinking (spell out period). Judgment on sliding whether to come or go is one thing. But deciding what is right or wrong, what is good or bad, or any form of this or that has a weight. Truth is lighter than untruth. In truth the day continues, the sun comes up and sets. Untruth weighs heavy and an aura of darkness clouds thinking any other way.

In that cloud the streams of “if” begin to flow. The problem with “if” is that the following words have to do with another’s thoughts, words, or actions. The perception holds heaviness as only true because of another. Helplessness persists until the other withdraws. The relationship between judgment and blame-shifting blinds the light of day. Thinking makes this so.

Following Mr. Wiesel, the opposite of judgment and blame-shifting would be indifference? Maybe. Let’s play with allowance and responsibility as the opposite. Acceptance seems to be the go-to action that encourages flow and peace. The sharp edge to acceptance is a subtle resistance, a sort of I’ll do it, but . . . Acceptance is the flow around obstacles rather than standing one’s ground. Allowance is a gift of being the rock, standing the ground and allowing the flow to go around. A sense of letting it be. Instead of finding the responsible party, step into that place. Be responsible and then act. I started sending texts to my congressmen. Something as simple as sending a text allows me to sit with myself. Others may scoff the little action, but the Universe knows. 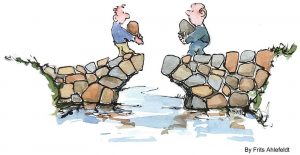 The world will not proceed in an either-or environment. Either-or thinking pronounces winners and losers. This is a side effect of compromise. Compromise leaves both parties losing something in lieu of another thing. Rarely do both parties leave the table satisfied. Cooperation offers the opportunity of all sides coming to an equitable agreement. Replace either-or with and. This new thinking is important to those in leadership roles.

“We must take sides. Neutrality helps the oppressor, never the victim. Silence encourages the tormentor, never the tormented. Sometimes we must interfere. When human lives are endangered, when human dignity is in jeopardy, national borders and sensitivities become irrelevant. Wherever men and women are persecuted because of their race, religion, or political views, that place must – at that moment – become the center of the universe.”